The second form of same Shri Krishna is known as Parmatma (परमात्मा). This form of Parmatma is known as Maha Vishnu. His divine form is ever adorned with four arms holding conch, disc, club and lotus. His permanent divine abode is Baikunth Dham. He reveals His Name, form, abode and attributes but no pastimes or His associates.

Baikunth is a place of unlimited majesty. His divine form with four arms itself reminds that He is God. Hence the devotees, who worship Lord Vishnu, attain divine abode of Baikunth with unlimited majesty and beautiful form similar to Maha Vishnu but they can only respect without any intimacy of love.

Then Shri Krishna explained,"There are innumerable Brahmas (creators) having 100 and 100,000 and even more faces. The number of their faces depends on expansion of their brahmand. Your creation is only 400 million square miles, and is the smallest of all. That’s why you have only four faces. The other brahmand are far bigger even 100 10000, and million miles bigger. I sustain all of them. So you should never ever ask this question".

The third form of Shri Krishna is known as Bhagavan (भगवान). When Shri Krishna descends as a human being concealing all His divine powers and with the sole purpose of bounteously distributing love, He is known as Bhagavan. His divine abode is Golok. This form is endowed with names, form, pastimes, attributes, abode and his associates. God comes down to the level of the common people without exposing His real divine form and showers love copiously on His devotees through ever new pastimes filled with fun. His pastimes are most edifying as well. Thus, it is the best form of God, which bestows divine love and easiest way to realize God. Because there is no fear of majestic form of Parmatma and no need of lots of arduous knowledge and apex of renunciation of Gyan Marg of the form of Brahm. Those who worship this form of Bhagavan attain divine bliss and Golok Dham or Saket lok. Examples of this form are Shri Krishna, Shri Ram.

Just like water, ice and vapor are three forms of water with different attributes, Brahm, Paramatma and Bhagavan are different aspects of the same Supreme God. Unlike water which can exist in one state at any given time, all three aspects of God have coexisted since eternity. Also, their attributes are also eternal. 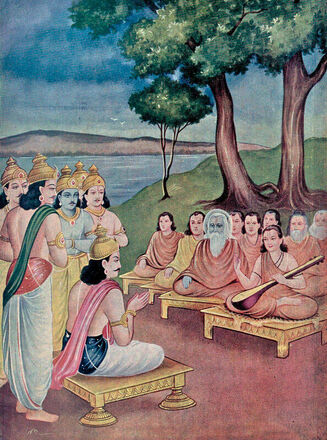 Narad Muni preaching to Pandavas
Everyone, sitting in the court of king saw a huge light descending from the skies. Everybody was curious and attempted to guess what it was! When that light descended further, an inconspicuous shape of a human was seen. They presumed that some devata is descending to the earth and though still inconspicuous that clarity made them happier. After that when the form further descended people identified the form and understood that Narad Ji was coming down. Then everyone joyously said,"Oh! This is our Narad Ji!" When Narad Ji arrived in the court, they welcomed Him. They gladly talked to Him and served Him.

It implies, when he was seen in a light form, people were befuddled and anxious to know instead of being excited to meet the personality. When he descended further and his inconspicuous form was visible, people became more eager to associate with him and when He apparently appeared in his human form, everyone was delighted to have his association.

The light form is compared to the impersonal form of the same God, who is known as Brahm. When his form was revealed a little more then that was the form of Paramatma. And when he could easily be seen and associated in all the way, is the form of  Bhagavan.

The Gyani (see Gyan) worships God in Brahm form, where they can enjoy Supreme God as a spot of light. No name, no form, no attributes, no pastimes and no abode in that form. As our mind is accustomed to focusing on things with a form and there is nothing to meditate upon in gyan marg therefore gyan marg is very difficult to follow for human beings.
निराधार मन चकृत धावे ।
nirādhāra mana cakṛta dhāve ।
The blurred form could be compared with Paramatma form of Supreme Brahm. The yogis (see Yoga) worship this form of Maha Vishnu. They enjoy divine form, name, many attributes, and abode. Yet they don’t enjoy the most blissful pastimes as associates of Supreme Brahm.

The most apparent form of Narad Ji is compared with the divine form of Bhagavan. When God descends on the earth in the form of an ordinary being with two arms, plays, eats and does all other things like a human. Seeing Him in this form, no one can imagine, He is God. Then it is possible for a human being to love Him freely. That was the state of inhabitants of Braj who never honored Shri Krishna as Bhagavan-Shri Krishna. They loved Him wholeheartedly.
Suggested Reading